Before You Can Fly

I remember seeing Sweetbread the first time as he swooped down awkwardly next to me and came in for an ungraceful landing just under our parked truck’s tire.  We had a lot of sparrows flying around, so I didn’t take a lot of notice until a little later, when he was still taking shelter under our truck tire.  I watched for a while to see what was happening.  It occurred to me that this young bird flew down out of its next too early and was not able to fly properly.  Its mom came down to feed it once while I was watching, so the sparrow was not abandoned…that was good.

By the end of the evening, my family decided it would be best to give Sweetbread (my 3 year old son’s name for him after we all said he couldn’t name another animal “Catty”) some shelter for the night so that our neighborhood cat wouldn’t eat our sweet new friend.  I cut a hole in a shoe box and placed some sticks and grass in it to make it a little homey, and my husband placed part of our mobile fire pit around the home to give Sweetbread a little fence.  If he could, he would be able to fly out, or the mom or dad would be able to fly in, but hopefully it would keep out the predators.

The next day I opened the shoe box to find Sweetbread alive, but lethargic.  Later that morning, I saw him perk up a little as his entire family—mother, father and brothers and sisters all came flying in and on the makeshift fence to see how he was doing.  There were at least eight sparrows flying around a chirping.  It looked as if there was a family discussion on what should be done for Sweetbread.  They attempted to get Sweetbread up to fly, but Sweetbread was not to be moved, even though he chirped a little for his mom.

Later on, I opened the fire pit door to make sure I was not keeping Sweetbread captive.  He could leave if he wanted to.  He did not.  I sat and pondered all of this.  We closed the door again before we left to go shopping for the day.  When we came back, Sweetbread’s family was visiting, but Sweetbread had died while we were away.  I had thought he only had an injured foot and wing, but the little bit of blood on his beak indicated he had deeper problems.

What struck me was how much older and bigger Sweetbread’s brothers and sisters looked than he.  Something had kept him from growing at the same pace as his siblings during this brief time of great growth.  His feathers were shorter and he was not free to fly in and out of a very simple fence.  It was safer for him to stay inside a small, enclosed area, than to be free and to fly away with the injuries he must have had. 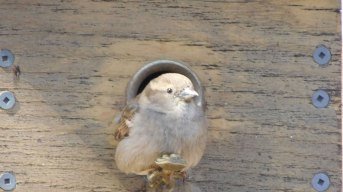 The injuries we may incur during our lives may stunt us as well.  Do we stay inside of safety?  Are we not flying while those around us seem to fly around us (figuratively) with no problems?  Sometime these injuries will keep us in the same place for much longer than we were ever meant to be there.  If we cannot heal, we cannot get out of the simple fence around us.  God has meant for his children to “fly”—to go and be free.  So many of us are still living stunted and in bondage. We need healing before we can do what we are meant to do.  We might need to know why a brother or sister in faith is not moving from their safe fence and little shoe box home.  They need to heal before they can fly…