Where the Birds Gather: Cultural Diversity

Living on the reservation had been a very difficult thing for me.  Not only did my cultural behaviors clash with the culture I found myself in, but so did my personality of vivacity, playfulness and love of deep truthful talks with friends.

I worked where the “evils” of whites where constantly preached about and were talked down about, breaking down the already fragile bonds of friendship between those friends of different races.  (Not to say that we haven’t been people who have brought great atrocities on others—but there is a point where forgiveness is necessary and the love between peoples needs to be restored). After I began to notice my racist mindset toward my own people after being constantly indoctrinated with the negative talk—likely from the desire to remove myself from the hurtful words through disassociation from my culture—I realized I needed to get a healthier perspective again.  I left the reservation for the sake of my sanity.

You may not have ever had to deal with not being accepted, but it is likely that most of you have to one degree or another.  And some of you have felt rejection for who you are all of your lives.  Some of you are just going through a season of feeling rejected.  Mine had been an intensely devastating season.

I was left wondering if it was wrong that I valued what I did, that I was how I was, if my culture was so wrong, and what was the right way to do things.  About half a year after returning home, my friends swept me away to a silent retreat where we were encourage to listen and talk with Jesus in an old abbey surrounded by a beautiful nature area.  Many people stayed around the abbey, but adventurer that I am, I went cross-country and looked for a little hide-away in the field or trees.  I found a delightful pond to spend time near, and was absolutely fascinated by what I saw there.

Birds of all types and sizes were gathered in and near the little cattail-lined pond.  Redwing blackbirds sat on the cattails and would then fly off.  A hawk soared overhead, gracefully above all of the feathery activity below.  One kind of bird would playfully soar close to the water with others of its type, seagulls flew in unordered groups not so gracefully as the other birds, and ducks and geese swam around the water or would walk up on the shore.

I saw how so very different each type of bird behaved.  Some were very regal, some were very fun, and yet they all gathered by the water harmoniously.  They could act different, and it was alright—that was how God had made them to be! 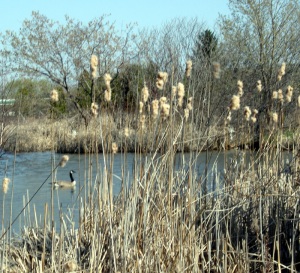 Suddenly I realized that people groups all have different styles and ways of acting, and none was the right way.  If God made birds to act so very differently from each other, then people, too, were valuable as different and unique cultures with their different values and perspectives.  In a way, valuing other groups was not an awakening to me—but being alright with my own group was a great awakening to my heart.  I related to the playful birds who would flutter and skim over the water.  There was nothing wrong with a playful spirit.  The Holy Spirit would gather all types of peoples together and all would benefit by the same pool of water.

Ezekiel’s vision of the kingdom of God:

“Swarms of living creatures will live wherever the river flows.  There will be large numbers of fish, because this water flows there and makes the salt water fresh; so where the river flows everything will live.  Fishermen will stand along the shore; from En Gedi to En Eglaim there will be places for spreading nets.  The fish will be of many kinds—like the fish of the Great Sea.”  Ezekiel 47:9-12

Every Tribe, people and tongue will be gathered at the throne of God in heaven (Revelation).  God values diversity—his love will bring all cultures and people together in Him.  And best of all, even if people don’t value me, it doesn’t mean that I am wrong by being who I am, it only means they do not understand the ways of a different type of bird—at least not yet.

So, I will end with this prayer:

Lord!  Let us love each other beyond behaviors, values, and appearance.  Let Your Holy Spirit bring peace between your people, and peace to ourselves. Help us know that our personalities are loved and valued by you no matter if anyone else values us.  But I also pray you bring us to a place where were are valued by others too.  Amen!?